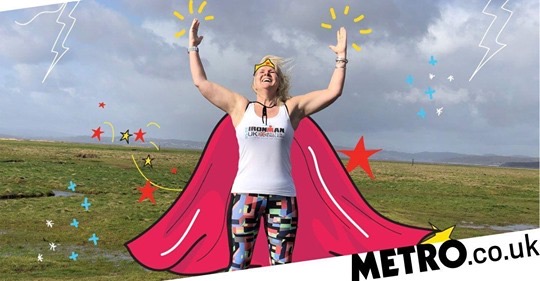 I don’t quite know where to start..so I just will!

I was asked to write an article for The Metro abut Strong Women and how they are perceived. I feel I need to say at this point that I thought The Metro was a little free brochure you picked up at The Metro shopping centre in Newcastle!
I had no idea it had a bigger circulation than The Sun!

Here is the link to the original article

They asked me loads of questions…and I wrote about dieting culture, emotional eating, depression, bankruptcy, drinking too much, going alcohol free, fitness, Ironman and building a business.

They chose to feature Depression, Bankruptcy and Ironman.

I was actually delighted when I was told they were going to feature my story as part of their Strong Women Series that they run on their online edition on a Saturday morning.
It had taken me a while to write but I found it quite cathartic. I was told it would also be great PR. It was the first time I would be featured in such a big publication and I was excited for it to come out. I planned to share it on all my social media channels.

It came out 10 days ago…I haven’t shared it!

I remember the morning it went live. I had just dropped Ben, my eldest son, off at Lancaster Train station. It was absolutely pouring with rain. I was sat outside the station and realised it was 10.20am…my article would be live.

I excitedly searched for it online…I saw the headline and I felt like I had been hit by a brick.

‘We Lost It All, I Was Suicidal, Signing Up To Ironman Saved Me!’’

I was utterly horrified. At first I was furious that they could dramatise and twist it in such a way. I was angry at myself that I had agreed to even write it. I just wanted to rip it off the phone screen…and everyone elses.

Within moments, these feelings turned to shame as I realised that they hadn’t twisted anything…It was completely true. We did lose everything, apart from our home, I was suicidal and Ironman did bring me out of the depression.

I sat in the car, parked in the 20 minute max wait bay for over an hour…the rain pounding and the windows steaming. I was thankful for the steam…it was my curtain to the cars beside me.

It was the suicidal part…I felt so embarrassed. I had told a few people and very occasionally casually dropped it in to one of my talks, but I always made it seemed not as serious as it was. I had never seen it written down…for everyone else to see.

It was 3 years ago now. I won’t go into detail as to why I felt suicidal here as it’s in the article, (not a plug to read it by the way)
I genuinely thought I was over it all, that my depression had lifted…and I really do think it has. I am no longer living life in bed and I am growing my business and just getting on with life…and being grateful that I have one.

However, I do feel shame and a lot of guilt about everything that happened. I thought I was over that as well.

Admitting to having a desire to stop living is really very difficult…I think that is why people don’t talk about it. I like to think I am a grateful person, I have learned to practice gratitude so much more over the last few years.
However, feeling suicidal makes me feel very ungrateful. There is no rhyme or reason. You just can’t make sense of it.

I feel when we were in the middle of it all 3 years ago..my suicidal thoughts were justified. Reading the article on line and been shocked at my own reaction has forced me to admit to myself that I do still sometimes feel this way…see I can’t even say it…yes, I do still feel suicidal occasionally. The shame that I feel in my heart just reading and acknowledging that hurts.

I feel I have no right to feel this way anymore. I am no longer stuck in the middle of the fear and worry that I faced 3 years ago…everything is going well , I love my family and my business is growing…so why do I spend some days just simply not wanting to be part of my own life anymore.
I just don’t understand it. It makes me hate myself.

I do know, however, that I have subconsciously isolated myself over the last couple of years. (And its probably not even subconscious..it’s just easier to write)
As I work a lot on line, on social media, I spend an awful lot of time by myself. Don’t get me wrong I am happy in my own company but I really miss proper connection.
I find this shameful and embarrassing to admit, but I have really struggled with loneliness the past couple of years. I do feel really lonely sometimes. I know that seems daft, when I have 1000’s of followers and I run retreats…but it really is how I feel.

Working from home, for yourself has its obvious perks…but it is a lot harder than people think.
Some people don’t even think I have a ‘proper’ job!

What is hard to process is that I could make more of an effort, but I shy away from making arrangements with my friends or with people who could become friends. It just doesn’t make sense. I have lost count of the times I have gone to phone a friend, or somebody who said ‘we should meet up’ and I just couldn’t do it. I still don’t answer the phone to numbers I don’t know and just a knock at the door still sends my heart racing.

I love my life but it often feels like I have left it…maybe because I have sometimes wanted to.

I ask myself if I have felt this way for longer than I am letting on…and was it was just masked when I used to drink wine. I know I used to create a lot of ‘fake happiness’ when I was drinking.

There is nowhere to hide now…I just have to sit with these feelings of often feeling like a useless human (not fishing…it really is how I feel sometimes)
I do believe though that, although sometimes difficult now, this course of action, acknowledging and accepting, will serve me better in the long run.

My article came out the same day as Mike Thalassitis from Love Island committed suicide. I was so upset to hear this tragic news. It is so very sad that someone can get to this point…it is such a waste.

I am really sorry to admit that it makes me also question myself, every time I hear of another suicide. What did they go through, what were they feeling that was worse than how I have felt, what is it that made them go through with it…there must be another level below me..that I am not aware of…or have I just not had the courage to visit it.

I know I have never gone that far, even on the days that the desire to do so was so great…but that does not take away the shame of even contemplating it.

I am aware that this post may make some people very uncomfortable, I am…its hideous writing about it. I am also aware that there will be the usual naysayers…saying I should keep my personal life to myself. I had that before when I first wrote about my depression 4 years ago, saying that social media is not the place for this.
I imagine there will be some saying ‘here she goes again…anything to get a few followers’…I’ve had that before too.

These reasons did almost stop me posting…but If I can help just one person who may understand how I have felt and still do sometimes, because they are feeling the same, then its worth every bit of my apprehension about pressing publish and the potential criticism.

I wish I didn’t feel shame and embarrassment about the headline in The Metro but I did…it was instantaneous. The severity of it shocked me. I thought at first I would just keep it to myself like some dirty little secret…BUT WE HAVE TO STOP THE SHAME. We really do have to make it easier for people to speak out about how they feel. Mental illness is real and it is rife.

If you are reading this and you can resonate with any of it, if you have ever felt like taking your own life, if you are feeling that now…then please please just tell someone. I know it may be the last thing you want to do…but please do not keep it to yourself. Tell a friend, tell a stranger, tell me! Use one of the many charities. www.mind.org.uk being one of the biggest ones. There is no shame in it…and the irony of me even saying that, I know, is ridiculous.

If you are worried about someone, please don’t let the awkwardness stop you asking them.
Please do feel free to share this post…from going from not wanting anyone to see it I now want to tell anyone struggling on their own with their own thoughts that there is another way…there are people who want to help. The hardest part is admitting to it.

Suicide is such a waste…life is such a gift. It is awful to admit that you sometimes just don’t want that gift anymore.
Feeling like this, is a lonely place…because you don’t like to admit it to anyone. I think this had added to my feeling of loneliness since my depression.

I was even contemplating starting a weekly walk…not a work thing but just a social walk. I was going to maybe charge a couple of pounds to raise money for a local charity. I just wondered how many people locally have felt the same, depressed, lonely or suicidal. I toyed with the idea of calling it The Sad Lonely F**kers walk but I fathomed I wouldn’t have many people showing up! The shame of admitting to any one of those is probably too great for most people.

If anyone would be interested in just meeting up for a walk, a chat, a social, then I will arrange one. I would love to raise awareness. There I have said it…and you don’t even have to be a sad lonely f**ker to take part! I would just love to let anyone know, that is hiding in their shame, that there are a whole bunch of people who understand.

Thank you for reading. I mean it.

N.B. This was written in March, 9 months ago. I have since set up my Mind Over Miles free Wellness walks. We have done 4 so far and are well attended!

I also am having fewer and fewer days where I feel suicidal. Not hiding from it, not letting the shame take hold and talking about it really do make the difference.